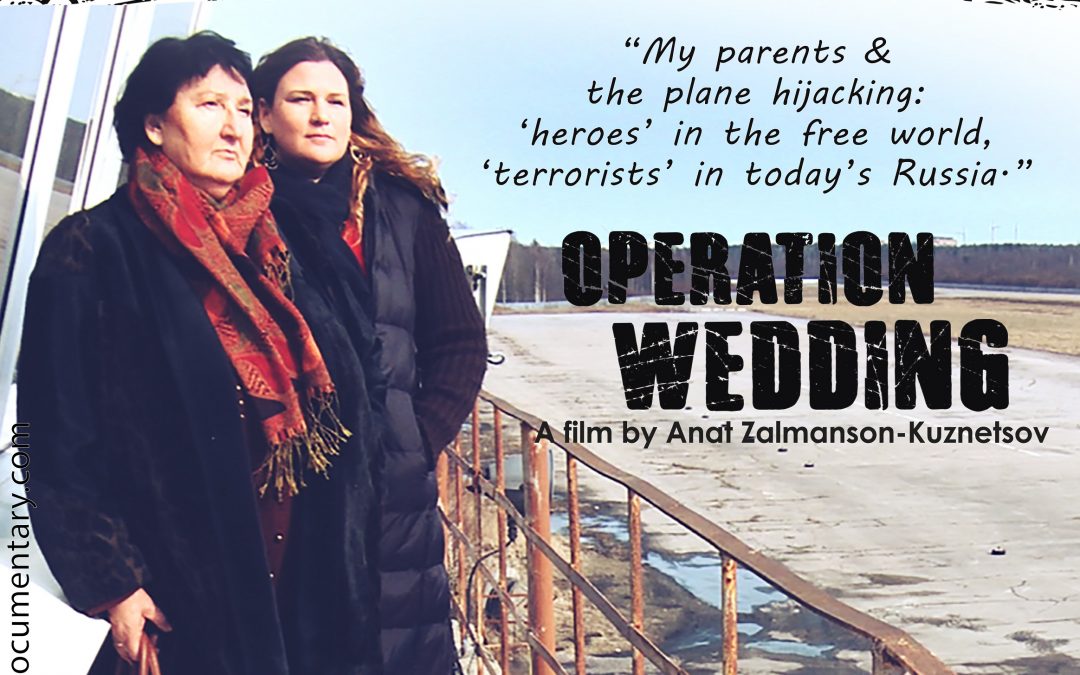 Show the film in your class or show it ONLINE to your students (request an educational screening license from the filmmaker).

The 2016 award winning 62 minutes long documentary “Operation Wedding” tells the personal story of the Filmmaker’s parents, Sylva and Edward, leading characters of a group that in 1970 tried to escape the USSR to Israel by hijacking an empty plane.
This event was the first effective act that kickstartred the Soviet Jewry Movement and cracked open the Iron Curtain for approximately 300,000 Soviets Jews in the 70’s, compared to only 3,000 in the 60’s.
The group members were held back to pay the price of freedom for everyone else.

If someone wanted to leave the USSR, from any reason, they had to ask the state for an exit permit.
It was impossible to fly or leave the country without an official permit. Most people would be denied, if they had the courage to apply for a permit.
In the free world every person who wants to leave his or her country,  must get a visa to enter the country they wants to go to. But Soviet citizens were not allowed to leave the country without permission from the authorities, nor for a short trip, let alone immigration.
Most people were refused for various and different reasons – thus became “Refuseniks”. As soon as a person summited the application, they were fired from their jobs or removed from school. Even if you started to associate with other Refuseniks, take part in an underground Jewish movement, you would be arrested and sentenced to all kinds of accusations, such as “espionage” or “homeland betrayal” and sent to a labor camp – a type of prison where everyone had to work hard physically, sub Conditions.

There was a Jewish Zionist underground in the USSR who secretly learned Hebrew, listened to Israeli or American radio, celebrated Jewish holidays.
In the free world, they did not really know the situation in the USSR, because the leaders would declare that everyone is free to leave, but simply do not want to. There were a number of instances that aroused public opinion.
The event that was considered a major turnaround in the departure of Jews from the USSR happened in the late 1970s thanks to a group of young Jews who decided to do a daring act – to hijack an empty plane and flee.
The idea was of a Jewish pilot who wanted to escape. The members of the group bought all the tickets for a flight inside the USSR, claiming they were flying to a local wedding, and the plan was to change the flight route in the air. The code name for the operation was “Wedding.”
This event affected all Jews in the Soviet Union.
The daughter of the group’s leaders, Anat Zalmanson-Kuznetsov, directed a “Operation Wedding” film that reveals her parents’ personal story.

Leningrad, 1970. A group of young Soviet Jews who were denied exit visas, plots to “hijack” an empty plane and escape the USSR. It started as a fantasy, Operation Wedding, as outrageous as it was simple: Under the disguise of a trip to a local family wedding, the hijackers would buy every ticket on a small 12-seater plane, so there would be no passengers but them, no innocents in harm’s way. The group’s pilot would take over the controls and fly the 16 runaways into the sky, over the Soviet border, on to Sweden, bound for Israel. Caught by the KGB a few steps before boarding, they were sentenced to years in the gulag and two were sentenced to death; they never got on a plane.

While the Soviet press writes “the criminals received their punishment”, tens of thousands of people in the free world demand “Let My People Go!“ and as the Iron Curtain opens a crack for 300,000 Soviets Jews wanting to flee, the group members are held back to pay the price of freedom for everyone else.

45 years later, filmmaker Anat Zalmanson-Kuznetsov reveals the compelling story of her parents, leading characters of the group, “heroes” in the West but “terrorists” in Russia, even today.

Screening the documentary Operation Wedding requires a license. Please fill in the screening request form at:

Below are suggestions for discussion points throughout the film. It is suggested that you pick a few main points to discuss during the viewing, and continue a conversation including other remaining points after viewing the film.

00:10:03: “Sylva Zalmanson: People who fight against an unjust regime, for freedom, must be prepared to pay a heavy price.”

Discuss: Would you be willing to give up your freedom or even your life in order to make a difference? Whom else can you remember in history that made the world a better place but he/she himself had to suffer for it?

Discuss: The group knew that they will be arrested but they still follow through with their plan. Would you have done this if you knew you would be arrested?

00:13:01: KGB General “If someone learns that you listen to the foreign broadcasts regularly, they would report to the KGB, and the KGB would start investigating. ‘Maybe he’s getting some intelligence instructions “from the West or something?'”

Discuss: People were arrested for spying simply because they listened to foreign radio, or learned other languages. Why do you think the Soviets were so worried about their citizens listening to news or being exposed to cultures  from other countries?

Discuss: What is the difference between a terror attack like 9/11, and operation wedding?

Discuss: What is the definition of “terrorist”? Do you think this group were terrorists?

The KGB also wanted to arrest us at the airport to show the world that the people who fight for free immigration to Israel are criminals and thugs.”

00:23:57: “KGB Deputy: Also, there was no problem of emigration…There were maybe 20 people who were denied exit visas.”

Discuss: Do you believe Bobkov for saying there were only 20 people? How many Jews were in the Soviet Union?

This interview is from 2004, 13 years after the USSR collapsed and everybody  already knows that people were not allowed to leave. Why do you think Bobkov is still saying that there was no problem of emigration” ?

00:52:44: “Edward: I don’t know of any worthwhile ideals that justify chopping off heads. There were many ideals considered the absolute truth, and many heads chopped off in their name.

Time passed by, the ideals were refuted, but the fallen heads were never restored.”

Discuss: What do you think Edward meant? What is his message?

Back to Lesson Plans